Strength and Conditioning for Cyclists 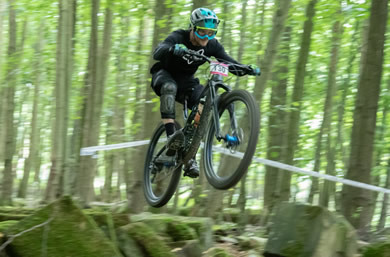 Many cyclists I know or talk to just ride for fun or on the topic of strength and conditioning believe that it will hinder their riding ability by being to bulky and losing aerobic fitness through strength training. This however, is far from the case, being fitter and stronger on the bike will enable you to get more from your rides and enjoy it more even if your not a competitive rider.
I am a very keen cyclist, happy to share my knowledge in exercise physiology and strength training that I have to help improve other's physical conditioning and ultimately improve their riding capabilities and enjoyment.

About me.... I have a MSc Hons Degree in Applied Exercise Physiology and a BSc Hons Degree in Sport Science specialising in strength and conditioning, environmental physiology and aerobic training systems. I have helped a Youth DH rider to a national championship win as well as experience in training elite cyclists throughout my studies at university.

I have been a very keen rider since an early age and ridden mtb dirt, street, parks during my younger riding days even dabbling in bmx but now mainly ride singletrack and dh. I use all my knowledge from my studies in my training to improve my own riding so I know what works! And I'm always trying to ride faster which means being stronger and fitter by training harder!

There are many areas where strength and conditioning will enhance cycling performance but we will start from the base of all human strength, the core.

So... "Core strength"... Probably the most important aspect in strength and conditioning for cyclists/mtbers (in my opinion). I will use this article to explain its function and importance in riding.

Core strength is the connecting key between rider and bike, from the hands on the grips to your feet on the pedals core strength is essential for body positioning, manoeuvrability of the bike, "man-handling" the bike and being able to rescue yourself from sketchy moments on the trail. To be able to produce force there must be a solid and strong base to be able to exert from, when handling the bike you must exert force on the bike in order to control it, the stronger and more powerful you are, physiologically, the greater your ability to control the bike. Strength and power are limited to the strength of the base or core it's generated from, the first riding example I will use is in cornering where the positioning (direction) of the shoulders and hips are essential for them to be aligned in the direction of cornering, with good core strength the shoulders and hips will have a stronger link increasing the resistance against other directional forces increasing cornering speed in and out of the turn.

It isn't just the bike that tests out our core strength, many of us riders wear backpacks often with 1-2litres of fluids plus foods, tools etc they may not weigh much (3-4kg) but on a 3-5 hour ride that small weight can add up and cause fatigue. This is especially the case when we stand up out the saddle on the trail as this is when our "cores" really get worked! When standing we then have to support our own bodyweight (plus kit) in a position that isn't natural to supporting weight as we are leaning forward with flexion at the hip (it is like the middle part of a deadlift) stressing our lower backs to keep that attacking position. Now if we add to the fact that we are constantly recruiting our core stabilisers when pedalling (so we can generate as much power through our legs to the pedals to the trail), using our core as a base for our arms to pull up on the bars (jumps, manuals, hops etc), push down (landings, pumping, cornering) and any cornering where we use our body positioning to manoeuvre the bike into the ideal position for tracking the line through the corner. If you are able to increase your core strength you will then be able to resist fatigue from any of the previously mentioned factors and increase the force you can exert on the bike improving all aspects of your riding. All of this added up = more speed, less crashes and most importantly more fun!

That was my brief, basic argument for the importance of core strength in riding, some may not have known this some may have. Now, here is how I used my training methods to increase my core strength.

1. Basic "stability" exercises such as the plank, side plank and cobra. These isometric exercises increase the strength and fatigue resistance of the deep core abdominal muscle such as the TVA, internal obliques and spinal erector muscles. Try holding for 1 minute on a progression/regression of the basic move whereby form is maintain but sufficient muscular stress is exerted. Once the exercise is made easily achievable, increase the time of hold or increase the demand by progressing the exercise.

2. Use free-weights for all resistance training exercises. Using free-weights instead of machines when weight training vastly increases the demand of the exercises on the core stabilisers, as previously mentioned the weight being lifted is reflective on how strong the core is when trying to maintain form of the exercise. It is also easy to manipulate the positioning of the body when using free-weights to increase the stress on the core further which will reflect on the riding ability.

3. Use large compound lifts. Deadlifts and squats are essential for anybody's workout program let alone the importance for cyclists. If there was only one way of training for my riding other than physically riding these lifts would be the only thing I would use. They recruit such a large muscle mass which many reports suggest increases the release of growth hormones aiding other areas of training, deadlifts use the entire posterial chain (all the muscles on the backside of you) as well as increasing grip strength and posture, squats recruit nearly every muscle in the legs as well as the deep core and stabilising muscles to protect the spine and hold the weight up on the back or on the shoulders (front squat). Both exercises can be used to increase strength, power and endurance dependent on the rep/weight range being used. Correct technique is more than important with these exercises so when doing them makes sure you have either a fitness professional or an experienced lifter with you when starting out. Many people avoid these lifts because they have "bad backs" or "sore knees" I reply with the statement the reason you have these problems is because you don't do these exercises!

I hope people find this useful and helpful towards there riding. For any training programs or extra advice on core strength training or training for riding checkout my website www.oliver-ody.com for more details....


« Previous
Return to blog page
Next »